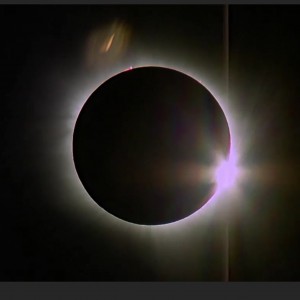 What were you doing on March 8th at 8:38 pm? I pulled up NASA TV and watched a live solar eclipse from Southeast Asia! NASA reporters pointed out the solar flares that became more clear and visible as the sky darkened, and the temperature dropped. They interviewed the native people and named off the stages for the people who didn’t know them.

I got to see the sliver of sun go to totality, which lasted for about five minutes. Totality is when it looks like the moon has lots of rays coming from behind it. Sometimes there is a diamond ring effect where light shines from behind one part of the moon more than the others. After totality ends, you often see Bailey’s Beads, which is different for every eclipse. Bailey’s Beads happens when the moon is grazing past the sun and the craters on its surface allow light to pass in certain spots, but not others.

Everyone knows that looking at the sun is dangerous, so you have to wear special protection goggles or look through a certain type of box to watch the eclipse. During totality in the middle of the eclipse, when the moon is completely blocking the sun, you can actually take your glasses off and see the sun’s corona, which looks like a halo around the moon. Of course, once totality is over, you have to put your glasses back on.

Solar eclipses are very cool and special, and anyone who gets to see one is very lucky. Even if you can’t see an eclipse, you should try looking up on a clear night. You never know what you may find. The next solar eclipse is on August, 21, 2017. The great thing is, unlike this last one, this one can bee seen over much of the continental United States, with the greatest duration in Missouri and the greatest eclipse in Kentucky. I hope that I can be there to see it myself!