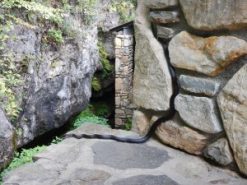 A rubber snake? While I stood on line for the Linville Caverns, I noticed a black snake that was about four feet long. It had been on the side of the wall for the entire time while I sat on top of the wall.  The snake was pointed down while its tail was still in the rock above. “Is that a snake?”, I asked as I pointed to the wall. My dad walked closer and said “That’s an odd place for a rubber snake.” He bent down to within a foot of it and reached out. Suddenly, its tongue flicked out! “That is not a rubber snake,” I said plainly as my father jerked his hand back.

I pointed out the snake to my family friends. My mom, Aunt Jenny, and Uncle Adam were all in line and did not see the snake. When I told them about it, Uncle Adam said, “All black snakes are nice.” “Would you pet it?” I asked. He shrugged, “Yeah, because, as I said, all black snakes are nice.” Once we were called to go to the entrance, we stood by the remainder of the rock wall. My sister and I looked and saw the snake that still slithered through the lower rocks. “Uncle Adam!” We yelled. “The snake is still here so you have to touch it!” After lots of urges and pushes, he came to the spot and quickly ran his hand along its side before it coiled up and hissed at us.

We all backed away from the wall and went back to the cavern entrance. Then, a woman came to the wall with a stick. She hit the snake on the back of the head a few times which immobilized it. Then she picked it up by the neck,  it  wrapped itself around her wrist, and she walked away with it. Now I knew why the rest of the staff called her “The Snake Lady”.

After she walked away, our guide, Orion, came over and gave us a brief description of his job and what to expect. We then walked into the caverns, where Orion told us the temperature, 52˚, never changed throughout the entire year. As we continued walking through the caverns, he pointed out the different stalactites and stalagmites. He also showed us some ribbon structures, or “Cave Bacon”, which were see-through. He showed us another formation called Flowstone that was a type of stalactite that was formed by dripping water.

As we went further into the cave, Orion showed us a clear, orange mineral hanging from the low ceiling called Coralite. Then he led the group into a narrow space over a metal grate. Below the grate seemed to be a sheet of plastic or glass, but as Orion talked, he clarified that it was water. It went down over hundreds of feet. Nobody knows how deep it is! A group of people once put a 250 foot rope down. It didn’t touch the bottom! A pair of cave divers in 2005 tried to swim down, but it became too narrow at 50 feet. 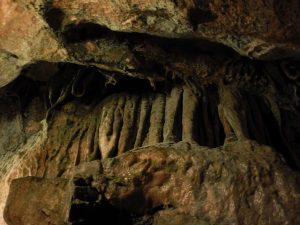 As we were lead through more of the caverns, Orion pointed out more stalactites and Flowstone. One was green because of plant life. It looked like a pickle. After we passed that stalactite, we met up with another group to experience total darkness. The staff turned off all the lights except one lantern that would have been used when explorers first discovered the cave. That made the cavern dim before they turned that off too. It was so dark that I couldn’t see my hand in front of my face! The other guide said that if you stay in total darkness for six months straight you’ll go blind!

After this we made our way out of the caverns and stepped in a tray of bleach. Covering your shoes in bleach prevents the spread of a fungus, Geomyces destructans. This particular type of fungus causes White Nose Syndrome, which affects bats. The Linville Caverns website said that 6 out of the hundreds of bats in the Linville Caverns are infected with White Nose Syndrome. It is called White Nose Syndrome because it is white when visible and grows on hairless parts of a bat’s body like the nose and wings. It is hard to detect WNS because the fungus is microscopic and can’t always be seen.

I liked visiting the cavern because it was cool (in temperature). It also had unique rock formations which are only found in caves. Also, the Linville Caverns is one of the two places in the US where you can experience total darkness. I recommend visiting the Linville Caverns or any other cave for people who don’t mind the dark and animals that are considered “creepy”, even though we didn’t see any that were included on the website. The snake was an extra bonus from the experience.