Have you ever been to the New England Aquarium? If so, then you’ve probably noticed that they have penguins. Now, if you have ever been there for a while, just watching the penguins, then you have seen the penguins poop. That’s right, poop.

You probably won’t be surprise that they poop. I mean, all animals poop. I’m not saying that it’s interesting (it sort of is, for me) or that you should go there just to see them poop. I’m just saying that if you’ve seen the penguins poop, you’ve probably noticed something about the way they do it. They project it! (Now, I know that some people are not fond of the topic of poop, so I’ll try to make this quick.) Anyway, they spray their white poop very quickly, but it’s pretty cool to watch (at least I think it is, but I have different opinions than most people). 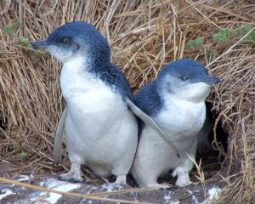 Now, on to a different subject. There are 3 types of penguins at the aquarium. There’s the Little Blue Penguins, the Southern Rockhopper Penguins, and the Africans Penguins. The Little Blue Penguins are small and bluish (as their name suggests). At first sight, you might think that they are babies, but you’d be wrong! They’re all adults. The Sourthern Rockhopper Penguins are the ones that have the yellow things on their heads that look like crazy eyebrows. The African Penguins have the black markings on their faces.

There are many other interesting and useful ways to learn about the penguins. There are lots of signs around that have pretty good information. For example, there is an interactive sign about what the penguins sound like. There are also touch screens that will show you their names if you put in the colors of the tags on their wings. If the tag is on the right wing, it’s a female, and if the tag is on the left, it’s a male.

Also, have you ever seen a cat follow a laser? Well, you can do the same thing, but with penguins! Near the African Penguins, there is a joystick and a button. If you press the button, a fish-shaped light will turn on and you use the joystick to move the light. The penguins will chase it!

And before you go to the New England Aquarium, you may want to do a little bit of research. But only if you want to. Now, why don’t you go look at some penguins?