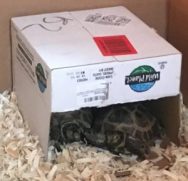 We have been taking care of 2 Russian tortoises for the past 5 weeks that we named Viktor and Yuri because they are Russian-sounding names who are also characters from an anime show.
Viktor and Yuri are both male, but if one of them were female, you would easily be able to tell the difference between them. First of all, males have longer tails than females, which is a big clue with gender. Another clue is that females are actually larger and wider than males. 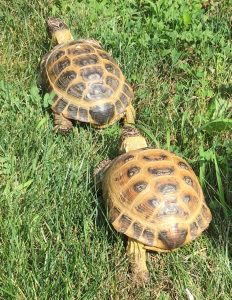 However with Viktor and Yuri, they are both males, but there are two main differences on their shells that will help you figure out who is who. The biggest difference is that Viktor has a lightly colored shell, whereas Yuri has a very dark shell and a small notch on his shell.
Their yellow-brownish coloring would help them camouflage in their natural surroundings. You could find Russian tortoises in… Russia! You could also find them in a large part of Asia and the Middle East, so I guess their names should really be Russian Asian Middle Eastern Tortoises, but that’s a mouthful to say!
In the wild, they can live more than 100 years, although most people say that they only live around 50 years in captivity. However if you look this up, you may find other numbers, such as 40 or even 80! Viktor and Yuri are already in their mid 30s. 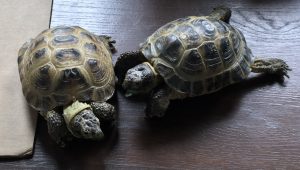 Of course, they still fight for territory, just like they would in the wild. In fact, they fight every time we put them in a new environment – in the bath, out in the backyard, or in a different room in our house. The fighting consists of biting and head butting, though they can’t really harm each other.
After they finish fighting, they get along just fine and even snuggle with each other, usually when they get tired or go to sleep. They also love climbing on things, too. My friend and I made a slide with a set of stairs for the tortoises which they seem to enjoy.

If you want a tortoise, you have to know what to feed them. We have been feeding them cabbage, lettuce, kale, cucumber, and some other greens. They also enjoyed eating the dandelions and plantain leaves in our yard. You can really feed them anything that is green or you can try giving them fruit.
Viktor and Yuri are really cute and full of personality, but don’t rush out to get a tortoise unless you’re willing to make a long-term commitment. Remember, they can live for 50 years or more!
I have enjoyed the Viktor and Yuri’s company a lot, and I hope that I will be able to take care of them again.