American Museum of Natural History has many permanent exhibits, but it also has a few temporary ones including its most recent one – Unseen Oceans, which opened in March. Organized by Curator of Ichthyology (fishes) John Sparks, it shows what hides in the unseen depths of the ocean. There are 3 sections: deep sea life, underwater geography, and deep sea exploration. 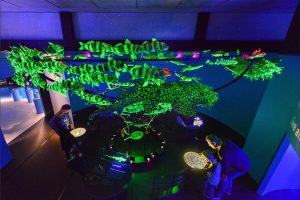 In the first section, there are three main rooms focused on different sized organisms. The first is all about microscopic organisms with microscopes and larger than life models of various creatures. On the side is a model of the Deep Ocean Remus-Echosounder (DOR-E) and a video about it, explaining how scientists collect data on the ocean at vast depths. In the second room there’s a set of rings, each one with life-size models of sea animals that glow in UV light. On the sides, there are 2 smaller rooms. One contains live seahorses, eels, and sharks, and the other has more models, showing certain species in different types of light. The final room has large screens that cover half the room. The screens show a repeating video of various sea creatures including sperm whales, giant squid, and a few types of fish. My favorite part of the section is the sea creature rings because it’s visually appealing and it also includes one of my favorite types of sharks: carpet wobbegongs!

The second part of Unseen Oceans has one main room that isn’t as big. Around the walls are pieces of black plastic to make the room look like it has different depths like the bottom of the ocean. There are a few models showing ocean rifts and currents, but my personal favorite is the most interactive one. There is a pit of kinetic sand, which is great by itself, but it has a light that shines different colors on it depending on the height, so the sand resembles islands and water. It may be meant for kids, but it can be plenty of fun for adults too. 😉

The last part of the exhibit consists of 2 larger rooms, one about submersibles and one about different scientists who study topics related to the ocean. The submersible-themed room is like a small theater, which  seats about 20 people. The show is about 5 minutes long and shows the journey of a deep sea submersible as it travels around the oceans in different parts of of the world. On the sides, there are 2 stations to play a simulation where you drive a submersible and collect coral samples. The final room has posters of scientists along the walls, but the floor is quite fun. Little white fish-like creatures swim on the floor, and will automatically swim away whenever someone comes near them. It’s quite amusing.

This exhibit is definitely enjoyable and I would highly suggest it for anyone who likes marine biology, exploration, or just the ocean in general!